You are here: Home / About Us / About PEI

Prince Edward Island, is the smallest of the Canadian provinces both in size and population. The Province is also called ‘PEI’, or simply ‘The Island’. The capital city is Charlottetown.
They say that to be a ‘true blue’ Prince Edward Islander, you must be born here. Otherwise, you’re ‘from away’. Despite this divine right to citizenship, Islanders adopt all who come to stay as well as its 1.2 million annual visitors. They come to the Island to enjoy its pastoral scenery, relaxing white sandy beaches and relaxing pace.

Spring is comfortable. Late May and early June are alive with colour and temperatures ranging from 8 to 22 degrees C (46 to 71 degrees F).

Summer is hot, but rarely humid. We wear short sleeves. Daytime temperatures are usually in the 20s (70s) and can go as high as 32 degrees C (90 degrees F).

Autumn is clear and bright. September afternoons can be quite warm, evenings cool. Temperatures range from 8 to 22 degrees C (46 to 71 degrees F).

Where are the beaches?

You will find good beaches almost all around the Island.

Welcome to the friendly and gentle atmosphere of our Island’s Bed & Breakfasts and Country Inns. You can count on your hosts for personalized service. They will be pleased to offer plenty of free advice about community festivals, local restaurants, attractions, scenic drives, secluded beaches or the perfect view. 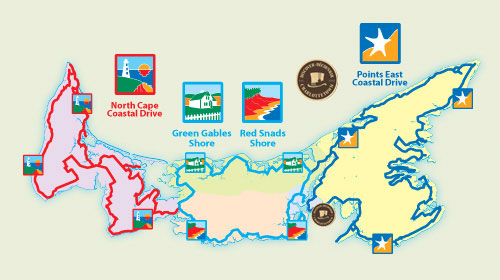